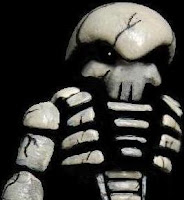 Phanost took residence in an abandoned space station drifting just outside the atmosphere of planet Jentrache. Kranion had not spoken to him in many ages but was confident he would cooperate. They held similar opinions regarding their Pheyden brothers and the paths they chose, and were on good terms. He was unaware that Phanost needed his help as well. Kranion would soon learn of the wretched existence of Toxar from his ally.
Newer Post Older Post Home