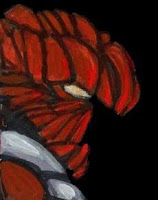 What will it feel like to be alone again? As much as he despised the Pheyden who dwelled within him, Govurom was comforted by the thought of sharing his anguish with another.
Newer Post Older Post Home