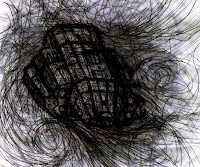 As MT-01 slipped back into oblivion, his ship initiated its cloaking sequence and homing beacon. The signal, weak at first, will slowly gain strength as the MT Transport’s power collectors gather the small pockets of energy found moving throughout Glyos. By his own design, MT-01 now existed in a self-perpetuating state of suspended animation.
Newer Post Older Post Home