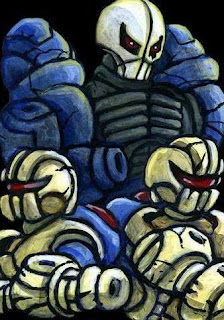 Were they the same as the others MT-89 labored among; not much more than machines serving their ungrateful owners? Or were they free thinking gendrones, making them mercenaries by choice? Attempting to communicate with them here was too risky. I must find out. We can use additional fighters for the offensive. He moved closer to MT-61 and MT-96 and merged his thoughts with theirs. The troopers turned to him in unison and nodded. The shared consciousness of those with Gen-Cog never ceased to amaze MT-89.
Newer Post Older Post Home