Something is not right. Kranion could feel it countless dimension away. He closed his eyes and reached towards the malevolent pulsing. His thoughts turned black as a retched murkiness engulfed his mind. Kranion knew this toxic life energy well. Govurom! He pulled back into his body and quickly got ready to leave. When they last fought, Kranion visually transported just himself and his collector and was ill prepared. This time he would take his ship, the Parabatis, and special equipment to neutralize Govurom's deadly energy blasts.

Kranion piloted the Parabatis out of its hangar and set a course for the Glyos system. Conventional space travel always frustrated him. Govurom never stayed in one place for very long and Kranion was forever a step behind when tethered to his spacecraft. If he could only convey himself and his gear using his powers! I could, but it may render me weak and vulnerable. I cannot afford another error. If I do not terminate Govurom this time, I may be forced to call upon-

He swiftly dismissed the idea. Kranion worked by himself and preferred the solitude. His role was a somber one and better left to him alone. He is warden of the Containment Zone in the Aidoneus dimension, a timeless cosmic underworld fed by the demise of all sentient beings. When an entity perishes its life energy naturally flows back to Aidoneus and merges with Origin, the central energy source it was created from. If it is contaminated, Kranion will quarantine the life energy to protect the purity of the source. Corrupt life energy can retain a level of consciousness and will sometimes avoid returning to Aidoneus as eternal imprisonment in a holding pod is a terrible fate. When this happens, Kranion must hunt it down and capture it. Govurom is like a virus and he is infecting the life energy of the ever growing number of creatures he absorbs. He has to be stopped before his actions cause a dangerous unbalance within Origin itself. 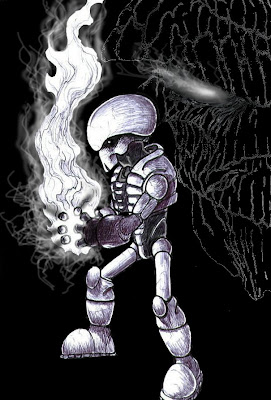 
After what felt like eons, Kranion finally entered Glyos. As the Parabatis flew over planet Alcray he picked up life energy from below that was unknown to him. It was far too powerful to be a single being yet it didn't seem to be disjointed like the collective energy of a large group. Kranion knew he had to investigate, even at the risk of losing track of Govurom. He reluctantly slowed and descended upon the sporian planet. The Parabatis touched down at the edge of a bog and Kranion disembarked with collector in hand. He never liked to take the life energy of living things but would in self defense.

A cacophony of explosions and phase arm blasts could be heard as he moved closer to where the foreign energy was radiating from. Kranion quietly scaled a small hill and cautiously peered over the peak. What...? The ground below him was carpeted with dead Crayboth! The ones that were still on their feet were being mercilessly slaughtered by a contingent of flat green Buildman gendrones. Kranion could see that groups of them had somehow connected and reconfigured to form huge battledrones, phase cannons, and combat vehicles. I have never known any life energy to come from a gendrone, never mind a unified force! If left unchecked...

He edged away from the ridge carefully. As soon as he was clear, Kranion made his way to the Parabatis and took off. He tried to make sense of what he had witnessed. Who is responsible? What could possibly be gained by killing Crayboth? He wanted to learn more but finding Govurom was his first priority. This new threat to the Glyos system would have to wait...for now.
Newer Post Older Post Home