The desire was all consuming. Nothing else mattered. It seemed the more he stole, the less he was satisfied. The rush when he fed. The growing pressure as his shriveled head swelled and became whole again. He craved those feelings always. He needed them now. He was slowly atrophying while he waited in ambush.

Govurom watched the pair of sincroids search for him. He had taken one of their ranks the day before and the Lost Sincroid Army was on high alert. These two are nothing to worry about. The isolation and subsequent inbreeding had diluted the younger LSA troops dramatically. First generation sincroids such as Govurom were far superior and each possessed a unique trait. His was the ability to absorb a being's life energy. It had proved to be more of a curse than a gift.

His unending hunger for energy had turned him into a grotesque creature. Long ago, he had foolishly attempted to drain a renegade version of Pheyden. Instead he fused with the powerful space traveler and mutated horribly. Containing two personalities in one physical form took its toll on Govurom. He had all but abandoned his hunt for ancient ruins and the mystical artifacts held within.

"This is Sector Three Patrol," the larger LSA soldier droned into his communication unit. "No sign of enemy activity in our zone."

The soldier had barely broken the connection when Govurom attacked from behind. He clutched their bulbous heads and sunk in his gnarled fingers. Precious life energy flowed through his body as the sincroids withered. He loosened his grasp and they fell to the ground in a heap. Govurom's skull was inflated with power, making him look almost normal. 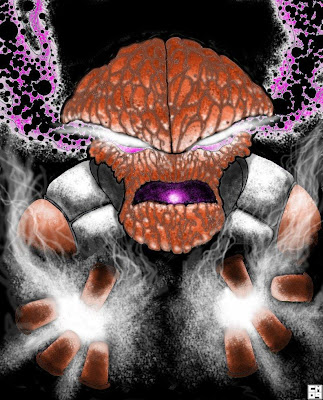 
It didn't last. He had walked fifty paces and the deep grooves were already returning to his face. His cadence slowed and his shoulders slumped. Govurom continued on, lost in thought. These watered down life forms are of no help to me. I need something better. Something more...filling. He donned his hood and wrapped the cape around his diminishing form.

He approached his hidden Dimension Jumper cautiously. The camouflage was undisturbed so Govurom exposed the hatch and climbed inside. He initiated the launch sequence and brought the navigation system online. The display requested coordinates. After a pause, he punched in a series of numbers and the spacecraft began its ascent into space.

Govurom's misshapen visage was hideous in the sickly green glow of the control panel. The Jumper cleared the planet's atmosphere and increased speed. The twisted sincroid sank back in his seat and stared at nothing. How much longer can I go on like this? A pained expression appeared on his ruined face. It was quickly replaced with one of determination. As long as I have to... The craft banked sharply as the onboard computer engaged the hyperspace thrusters. The ship flickered momentarily and was gone.
Newer Post Older Post Home