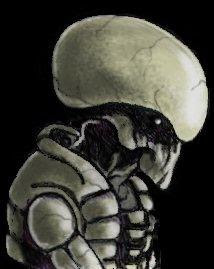 
The Parabatis cut through space in pursuit of Govurom. He grew stronger for a time but he's fading rapidly. He will need to absorb again soon... Kranion felt a shift and knew Govurom was on the move. The Dimension Jumper's unusual shape made it difficult to identify and track with conventional equipment. Kranion would have to rely on his heightened awareness. Finding Govurom was always challenging; collecting and containing his venomous power had proven close to impossible.

A warning light flashed brightly in the cockpit as information scrolled across the display. Two fighter class spacecraft were approaching rapidly! Kranion recognized the life energy that was bearing down on him. The Buildman gendrones must have detected my presence on Alcray! There was not enough time to escape using the hyperspace drive and he couldn't chance a skirmish with a force of their size. His only option was to try visual transportation.

Kranion recalled his encounter with Cosmic Wave and the Gargethion on Botellias. He envisioned the Parabatis surrounded by the plentiful flora of the planet. The sensation of being stretched to the breaking point overwhelmed him. Slumping forward over the controls, Kranion lost consciousness. His vessel became translucent then disappeared altogether. The fighters reached the spot the Parabatis had just occupied and hovered.

"Conduct a final sweep and rendezvous with us prior to our destination," MT-52 replied. "Delete all data pertaining to your activities. Under no circumstances are you to return directly to base."

"Understood. MT-68 out." He relayed the commands to his fellow pilot and they skillfully executed the search flight pattern. Discovering no trace of a craft, the gendrones vacated the area.

On Botellias, the Parabatis lay unevenly on a bed of thick kryno bushes. Kranion's position had not changed. After a few moments he came to. Bolts of pain shot through his head as he struggled to sit upright. Kranion managed to initiate a full systems check while he gathered his thoughts. Evasion agonizing...but...necessary. Was right about transport...too risky.

Fortunately, no damage had been done to the ship. The same could not be said for him. He was completely exhausted and a blackish fluid oozed from the corners of his lifeless eyes. Kranion absently wiped it away with the back of a shaking hand. Once again his attempt to imprison Govurom's life energy had been derailed. He began to wonder if forces greater than those he served were at work in the Glyos system.
Newer Post Older Post Home