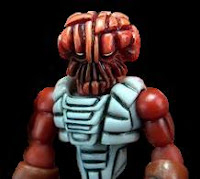 The Dimension Jumper lay veiled behind its cloaking pane. Govurom followed the gendrone fighters with his eyes as they passed. Who are they? He waited for some time before he dropped cover and moved on. When Govurom first learned that two small ships were coming he considered challenging them. He was glad that he chose to hide instead, even though he desired the life energy of the pilots. The styling of the spacecraft and their rigid flight formation said they were military. Govurom was already on the Lost Sincroid Army's most wanted list and did not need a second armed force gunning for him.

He promised himself he would resume his quest once he was at full force. If I can locate the datadisc, I should finally be able to separate myself from this Pheyden who steals so much of my power! Legend told that the relic held the secret to dividing two entities who occupied a single body. Govurom had scoured many of the archaic remains of civilizations spread across Glyos without luck. His constant yearning for life energy had taken priority as of late, but he knew he had to keep looking or eventually waste away. I will find it!

Govurom leaned forward to disengage the navigation system. He decided to change his destination and guide the ship manually. The Metran government had an observatory on remote Seleneai where scientists typically conducted space research. Their planetary maps might help him identify new places to search, and absorbing organic beings always gave Govurom a healthy boost. He nimbly steered through a field of floating space debris as he imagined holding the datadisc in his hands.

Seleneai soon came into view. To avoid detection, Govurom went to the side of the planet opposite the Metrans. He then flew just above to the surface until he was within walking distance of their facility and landed the Jumper between two bluffs. Concealing it with vegetation, Govurom left and made for the observatory. As he drew closer he spied two solo ships out front. Perfect...

He was planning to override the access panel but found the hatch ajar. Something is wrong. He slipped through the opening and down the long corridor towards a well lit area. Govurom pressed against the wall and carefully peered into the room. A pair of bodies clad in white lab coats lay on the floor. He saw the gaping holes from where he stood and knew they were dead. Anger from losing his repast gave way to speculation.

The scientists were shot with serious weapons. Why? Perhaps whoever did this feared being seen though their powerful lenses? Govurom wondered what type of covert operations could be taking place in the Glyos system to warrant these murders. No time to make sense of this now. I must go! He gathered the charts he needed and dashed out of the building.
Newer Post Older Post Home